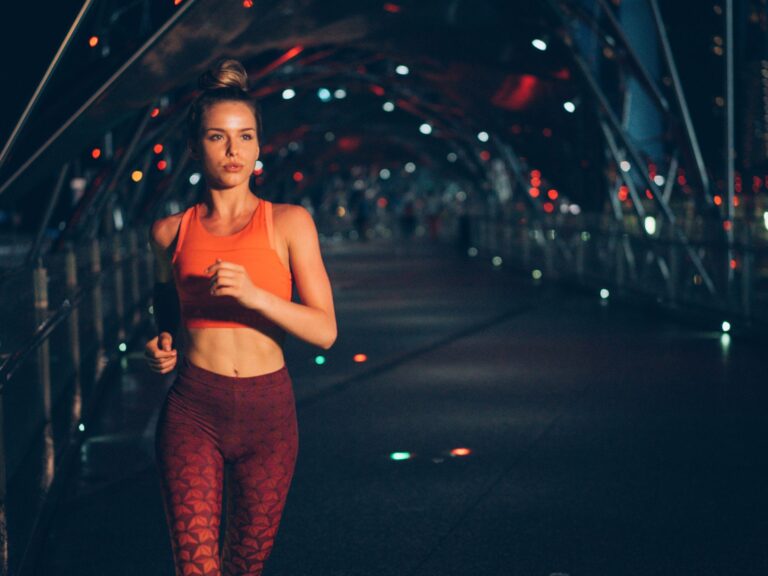 What Are The Benefits Of Working Out After Midnight?

There are many benefits of working out after midnight, such as

If you feel like your workouts are less effective in the morning, there’s a reason for that. A study from 2013 examined four physical activity indicators such as oxygen uptake and anaerobic capacity among twenty healthy men. They observed that the participants were able to exercise 20percent more frequently and for longer hours on reformer pilates during the evening hours compared to the morning hours. Studies have also demonstrated that a rise in body temperature in the later hours of the day is associated with greater flexibility and strength of muscles.

Exercising early in the day provides you with an energy boost before you begin your day. However, exercising after your work or family obligations can indeed give you the chance to take a break, even for a short period, from the day’s stress due to the endorphins produced by exercise that positively affect your mood. Studies have also proven that exercise can assist in the prevention of tension.

In contrast to the common opinion that exercising prior to going to bed won’t necessarily have a negative impact on your sleep if you’re engaging in a moderate activity such as a walk or bicycle ride. Doing moderate exercise before taking a nap can improve slow-wave sleep, the deepest phase of sleep. The most important factor is avoiding intense activities and keeping the intensity within the moderate range.

One of the most significant benefits is that there are usually fewer people at the gym to get more one-on-one attention from the staff. Additionally, the gym will be much quieter, so you can focus on your workout without distractions. Lastly, working out after midnight can help you burn more calories because your body works harder to maintain its core temperature.

Another benefit to the nightly workout is that it can set the stage for a great tomorrow. In addition to lowering your anxiety and stress pressure levels, allowing you a good baby sleep, you’ll awake feeling rejuvenated and ready for the next challenging day.

A review from 2015 revealed that active and young adults who consumed a protein drink following a workout and prior to going to bed had higher levels of amino acids than those who drank the placebo. This suggests that protein was more easily absorbed and digested while asleep.

What Are The Downsides Of Working Out After Midnight?

There are a number of potential downsides to working out after midnight, such as:

Moderate exercise is beneficial to your sleep; engaging in more strenuous things, such as intense interval training (HIIT), less than an hour before bedtime could negatively affect the quality of your sleep and lead you to get up earlier, often during your sleep. If you are the only person at night when you have to do an exercise session, you might want to consider an exercise that is less strenuous such as jogging for a short distance or yoga.

As per the health experts, the aerobic workout creates endorphins that stimulate the brain and keep an individual active. They recommend that to mitigate this effect, those who exercise in the evening should do so for at least one to two hours before bedtime so that the body has time to relax.

While some studios and gyms may have night classes, most instructor-led group exercises are available during the daytime or early in the evening hours. The schedule of classes later will be contingent on the location you live in. Be aware that there are advantages when you exercise with the whole group. One study revealed that those who took part in group fitness classes reported better physical and mental health than those who exercised alone or with at least two other participants.

A study conducted in 2018 revealed that those who exercise in the morning are more likely to stick with their exercise routines than those who exercise at night or midnight. Also, you might not have enough energy to push yourself. Another is that you might be so tired from the day that working out will only make you more exhausted.

Working out after midnight used to be considered a no-no, but recent studies have shown some benefits to working out later in the evening. However, there are a few things to keep in mind before hitting the gym after sunset. If you’re looking for a workout that can be done any time of the day, contact Element Fitness Health Club. Contact us today to learn more about services and other fitness programs to help you meet your health and fitness goals. Visit us now to book your free trial fitness session.